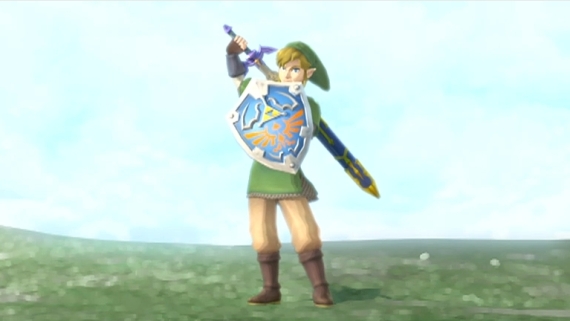 I’ve been a long time fan of the Zelda franchise. I admit my first love was Ocarina of Time, but I’ve since gone back and played the classic SNES titles and can happily say I’ve played every console iteration of the series in the last 10 years. Some people were bothered by the Gamecube’s change-up to cel-shading but I thought the quality of the gameplay more than made up for that fact. Others were disappointed by Twilight Princess for not living up to the hype, while I was more enamored with the setting and attention to plot that was lacking in most other Zeldas. So I was extremely excited to play Skyward Sword, which was the only game this year to receive a 10 rating from Game Informer, with games like Skyrim, Batman and Uncharted 3 receiving the so-close-yet-so-far 9.5 rating. So my expectations were quite high for this. Did this game really break through and show the perfection that a 10 rating would warrant? In one word, no.

By around 2/3rds of the game I realized I did not like the game. It’s a shame it took that long to realize that because honestly there were signs all along the ride that should have been glaring warnings that I just didn’t heed.

The story starts strong. You are on an island in the sky and are apparently the last bastion of humanity left. The Goddess supposedly saved humanity by sending them all to said island, yet there are less than 30 people in the world. What humanity was saved? The world below is blocked off by impenetrable clouds and is only the stuff of legends. Transportation is handled through skybirds that look like the platypus of the sky. It is emphasized early in the game that there is a strong connection between the bird and the hero Link. This is never brought up again past the first 30 minutes in the game. Zelda doesn’t seem totally useless or helpless as she has in the past games, and this held true for at least half the game. She gets kidnapped after a lengthy introduction period that teaches you everything you need to know to play and then some, regardless of whether you want to learn it or not.

A little while later you finally receive your sword and your helper-companion. I honestly can’t even remember the name of the sprite that helps you. I ended up calling her Navi 2.0. She did not have an obnoxious “HEY! LISTEN!” call-out as Navi did. No, instead she just popped out whenever she felt like to state the obvious. “Hey Link. You got a sword. You should go attack bad guys now.” Except she spoke like a robot. So apparently there are robots that like to do a little ballet while tirelessly explaining everything that just happened.

Finally you are allowed to explore the world below, the only locations that were actually exciting in the game. Upon first landing in the world you are given a view of the map. There are 3 major regions: fire, forest and desert. Typical of Zelda fashion. Except for the part where you only get to explore these regions. My biggest complaint is a lack of diversity in the game. Sure, there is a hidden lake in the desert and some of the dungeons had a little variation. But when I progressed the story I want to feel like I’m touching new territory every time. Not backtracking across extended versions of the same location.

Zelda has always been known for lots of “go to this dungeon to collect X so you can go do Y”, they just tend to mask it behind having a cool new tool to use and explore further. Halfway through the game I felt like all I was doing was busy work. It was made all the worst when, right before the final dungeon of the game, I’m required to learn a song from a dragon I had previously helped, requested services from and who had helped me to further my goal to become the Hero of Time. Except when I arrived she told me I had to accomplish ANOTHER arbitrary task to prove myself, which required me to swim around collecting tadpoles that represented parts of the song. Really? Really?

By the time I was finishing the final dungeon I knew how I felt about the game. This was not a 10-rating game. In fact, I would venture to say it was not even a 9. So many things in the game were off for a blockbuster hit that were only allowed to slide because of the franchise name.  The sword fighting was very well done and required some thought but after the 3rd temple the only challenge came from boss fights. There was a bug collecting part of the game that had practically no return investment, as well as treasure hunting to improve tools that was not so much necessary as it was a way to kill time. You never get to do anything cool with the flying bird other than to and from locations. Even the puzzles weren’t terribly interesting.

I give this an 8/11. Skyrim has it’s glitches and Uncharted 3 lacked side-content to make you want to come back for more but both of these were more deserving a 10-rating than Skyward Sword.