A Biased Review – The Social Network 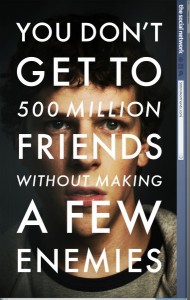 I managed to catch this film on opening weekend, a rarity for me. I hadn’t heard much about the film until about a week before it’s release and was surprised by what I did hear. Out of 40 reviews on Metacritic, 30 of them gave the film a 100%. I couldn’t believe a movie about Facebook could do that. It’s less surprising when you see the faces behind the film. David Fincher of Se7en and Fight Club fame directed it and Aaron Sorkin who wrote West Wing and A Few Good Men. I went in with low expectations and facing a win-win scenario. If the film was good, I could at least be happy to know Fincher and Sorkin could make gold out of an otherwise crappy premise, and if it was bad, I wouldn’t be surprised because it was a film about Facebook.

What most people and reviewers are unwilling to understand is this film isn’t necessarily about Facebook. It’s about the people behind it and the start-up that ruined relationships. It’s about one character’s drive and what he is willing to do to achieve his goals. Hollywood has glamorized the film as “one of the best films of the year” and while I did end up enjoying it, it was far from perfect.

Jesse Eisenberg, who starred in Zombieland and Adventureland of no relation, plays Mark Zuckerberg, the founder of Facebook. He plays an empty and emotionally confusing role and portrays himself as nothing short of an asshole throughout the film. It was hard for me to understand this character’s motives and drive, but then that was the point of the film. It’s made clear that Mark doesn’t care about friends or money, so throughout the entirety of the film I’m left wondering what motivated him to take the actions he did? Jesse does a wonderful job of making this character feel isolated in just about all the social interactions of the film.

The film plays out through flashbacks of the events that led up to Mark being sued by his friends and enemies. The other characters, his friend who co-founded The Facebook, the two jocks he steals the idea from that are a part of an elite collegial group, Justin Timberlake’s spot-on performance as the founder of Napster and the occasional girl, all play their roles to a T.

I don’t think the film should be noted for it’s accuracy. It’s a drama and likely bits are fabricated for sales sake but it isn’t done tritely. By the end of the film, I felt for many of the characters, even Mark himself, but each served a stereotype that we are all familiar with. The jocks being the well-off brats, his friend looking out for his, and at times Mark’s, best interest, and Timberlake playing the party animal whose own self-indulgence gets the better of him.

Many reviews I’ve read so far for the film talk about how Hollywood got it wrong. They didn’t understand or grasp the concept of The Social Network or what Facebook was about to the modern era. I agree that the movie didn’t focus on Facebook itself at all, but then a movie about how 19 million people play FarmVille isn’t intriguing in the slightest.

Asking such acclaimed filmmakers to stick to a source material that would only appeal to such a small niche of folks is like trying to criticize Mel Gibson for focusing too heavily on Jesus’ beatings in The Passion of Christ. It was an aspect of the film, but not what made the film interesting. The film wasn’t supposed to be an expose on how people interact in the modern day. That is to be left for a documentary and I don’t think the film ever portrayed itself as trying to tell that story. The poster and tagline of the film made it clear this was about one man’s story. “You can’t have 500 million friends without making a few enemies.”

I did enjoy the film and would recommend watching it. I think the movie was over-hyped by the media and on occasion left me pandering for the next scene, but is a better drama than any I’ve seen this year. I can’t say that the theater gave anything special to the film, so you can wait until it hits DVD or pirate it if that’s your way.